The Coatings Department, like all our divisions, make Horner Industrial different and give us an advantage over our competitors. Many of our customers and shop employees know what metal spray is, since it has been around for awhile, but most don’t know why our Thermal Spray makes us a leader in our industry.
Most believe that Thermal Spray is the “Powdered Metal Spray” process under a new name, BUT, they ARE NOT THE SAME. To help you differentiate between the two processes I’ve included pictures of the guns used to apply both, Twin Arc Thermal Spray and Powdered Metal Spray. As you can see by the two pictures, the guns used to apply the two processes are as different as night and day, kind of like a flip phone vs a smart phone with that same vast differentiation in technology.
The Twin Arc Gun, as you can see, has two wires protruding from it. At the apex, where the two wires meet, is where the metal melting point is, (the wires have been extended for the picture). The “Twin Arc” refers to the two wires coming together to create an “Arc”, thus the name. Both wires have power to them so when they touch, they create a short circuit which in turn creates an arc that melts the two wires creating molten metal. The gun has a 100-psi air stream running through it so when the wires vaporize into little metal balls the air propels it forward onto the surface to be coated. As the molten metal hits the surface of the part to be sprayed it slightly melts the base metal, instantly bonding to it, and subsequently all of the other spray in the stream melts itself to itself allowing the surface, in some cases, to be built up to almost 2” of “new” metal. The surface can then be machined or ground down to the desired dimension. Except for rare occasions, the Thermal Spray process can only be removed by machining or grinding it off of the surface. You can beat on the surface once it’s coated and it WILL NOT come off.
On the other hand, we have the Powdered Metal Spray process which is the process everyone is familiar with. Note than the Metal Spray Gun has a canister attached to it to hold the metal powder. The gun is fed with a combination of air and gas to create a flame, (similar to an acetylene torch). The metal powder is then fed into the flame, (usually a gravity feed which is susceptible to blockages causing sputtering creating an uneven surface), when it hits the flame the metal powder melts and is propelled by the air pressure feeding the flame onto the surface to be coated. Unlike the Thermal Spray process, the metal powder isn’t hot enough to momentarily “melt” the base surface it’s being applied to, and it bonds to itself to the base metal more like an adhesive instead of actually becoming part of the base metal like Twin Arc Thermal Spray. The Powdered Metal Spray process actually does a better job of adhering to itself, than it does adhering to the base metal. It too can be built up but only by thousands of an inch and not by inches like Twin Arc Thermal Spray. The problem with Powdered Metal Spray is that it somewhat brittle and if it is hit the coating will come off, usually all of it in one big chunk. It has also been known to come off when torsional forces have been applied to the surface. This is why it has a participially bad rap in the industry.
This is our advantage over the competition and makes Horner Industrial a leader in the industry of industrial repair. 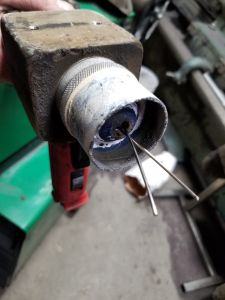 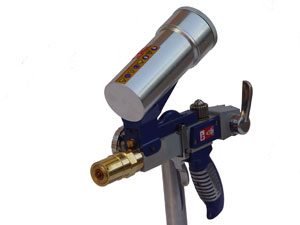