Sound and Vibration From Pulse Furnace

Sound and Vibration From Pulse Furnace 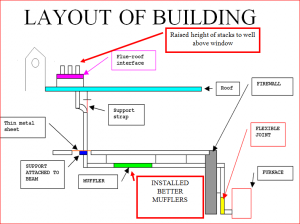 A new building had been constructed at a university and it had objectionable levels of both sound and vibration. Both problems were related to the three pulse furnaces heating the building. The furnaces were located in the basement. The furnaces’ flues ran under the floors then up a chase and out through short stacks in the roof. Vibration and sound spectra were taken in the offices areas where there were problems. The primary frequency in both the sound and vibration spectra were at approximately 37 Hz, which was the pulse firing frequency of the furnaces.
At the end of the building next to the offices with the highest sound and vibration levels, there was a hollow square tower that only contained stairs. The tower went up past the rooftop much like a church steeple. In the area of tower that stood above the roof, there was a 3 ft. diameter circular window. This window was directly across from the furnace exhaust stacks. It was discovered that this window was vibrating with extremely high levels of vibration at the furnace pulsing frequency.
When a resonance test was performed, it was discovered that the window’s natural frequency was very close to the pulse firing frequency of the furnaces. This meant that near the top of the tower there was effectively a 3 foot speaker pumping energy into the tower. To make matters even worse. The height of the open tower was approximately 30 feet, which matches the wavelength of the 37 Hz frequency.
Two actions were taken to resolve the problem. The first was to put mufflers on the flue lines. The second was to raise the height of the flues to well above that of the window in the tower, so it would not be excited. These actions solved the problem.