A Warehouse and Logistics Company was having electrical problems with three roof mounted exhaust fans. Apparently when installed they had been wired incorrectly. Time took its toll and the units eventually stopped working. The electricians who were called in to evaluate the unit, contacted Horner to evaluate the unit from a mechanical perspective. As suspected, the fans had been installed incorrectly as well. Upon inspection by Horner the following issues were found: incorrectly wired motors – causing failure and incorrectly mounted frames – causing belt wear, sheave deterioration and bearing failure.
The customer had the units removed from the roof and Horner went to work on the three identical units.
-Replacing one motor
-Replacing bearings, sheaves and belts
-Dynamically balancing the fans
-Repairing and straightening the frames so the fans would not impact the frames
The shop time on the fans was seven working days. The Customer scheduled a crane and we delivered completely refurbished fan units ready to go to work.
Keeping the Customer’s down time to a minimum and maximizing efficiency.
After all that’s what Horner Fan is all about! 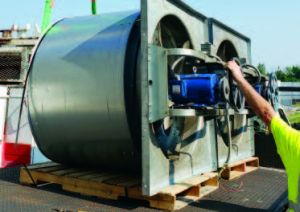 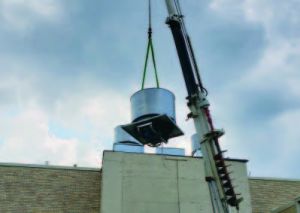