Power Loss At Foundry Results in Only One Shift of Downtime

Power Loss At Foundry Results in Only One Shift of Downtime 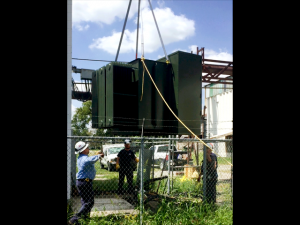 On August 14 while at a forging plant in Portland In, Horner technicians were already onsite for arc flash data collection. During this time the entire plant experienced a power loss as one of their eight padmount transformers failing.
Mike Croft and Ryan Haffenden were already onsite and were immediately called upon to assess the situation. Upon inspection, the far south compressor room transformer had experienced a catastrophic event on one of the load break elbows and cutout fuses of the 15 KV line feeding the transformer. After initial testing of the transformer it was quickly realized that the transformer was in need of replacing due to water getting into the 15 KV line from the power pole next to the transformer. The customer was urgent to restore power and get the South Hammer Shop back up and running. Generated power was the quickest answer.
Horner contracted MacAllister Power Rentals to rent a 800 kw generator. Don England in the Horner semi-tractor delivered the generator that same evening. Horner technicians disconnected the old transformer and connected the temporary power cables to the 480 volt entry point of the compressor room. By 11:00 that same evening the 3rd shift of the south hammer shop was back up and running.
The plant in the meantime approved the proposal to replace the transformer. The existing transformer was removed two days later and the new transformer was installed all in one day. On August 18, only 5 days after the catastrophic failure, the new transformer was energized and tested successfully. During this week the plant only lost one shift of production. The customer was able to continue production and their appreciation came from many different levels at the foundry.
Mike and Ryan organized the project and the work including the sub-contractors needed to complete the job and the new transformer. These guys went above and beyond their normal duties to help everything come together. Horner employees that worked on this project included: Mike Croft, Ryan Haffenden, Mark Tribby, Corban Hartley, Jerry Voelkel, Gary Anderson, Don England, and Bob Fischer. The Foundry and Horner thank you all for your hard work! 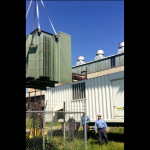 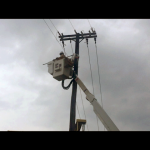 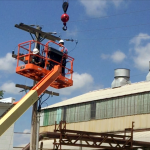