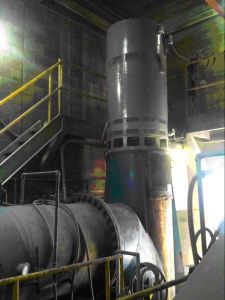 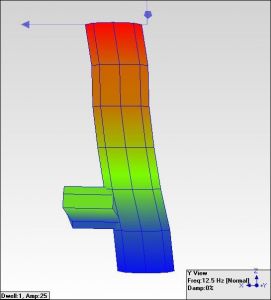 It is well known that the installation of VFD drives has the possibility of introducing vibration problems on rotating equipment.  When a machine runs through a wide speed range the probability of operating at or near a resonance is significantly increased as compared to a machine operating at a single frequency.

VFDs are generally utilized to slow the speed of a machine down to match the load, thus saving energy and allowing better control of the process.  The inherent nature of the design of vertical pumps means that there is a large mass (the motor) sitting on top of a relatively narrow structure (the vertical pump case).  That combination of a heavy mass on a relatively weak support results in a low natural frequency.  Most vertical pumps therefore have a natural frequency that lies near or below their operating speed.  Therein lies the problem.  When the VFD lowers or raises the speed of the vertical pump to match the load, there will most likely be a speed encountered where the rpm matches a structural natural frequency.  Since the structures are generally fabricated steel, the damping is low and the amplification factor is therefore high.  A residual unbalance force that might have resulted in a low amplitude of vibration for a non-resonant system can therefore produce very high levels of vibration when a resonant speed is encountered on a lowly damped vertical pump.  To complicate things even further, vertical pumps usually have non-symmetric stiffness values in the two orthogonal directions that correspond to the directions that are in line with the discharge line and 90 degrees out from the discharge line.   This means that there can often be two natural frequencies to deal with instead of one.  Threading the needle so that the desired operating range of the pump does not excite either of these natural frequencies can pose a challenging problem.

There are also electrical harmonic issues and bearing fluting problems that can arise when VFDs are installed. This paper discusses test techniques to identify vertical pump natural frequencies and possible solutions to this class of problem. Included in this paper are also short discussions related to the aforementioned electrical issues associated with VFD applications.