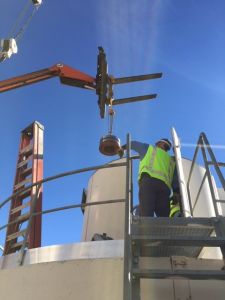 In January 2018, the Springfield Division was contacted by a large electrical contractor to quote a hydro generator collector ring assembly repair and replacement. The contractor received a RFQ to replace the Hydro Generating Station, in Ashland, OR, excitation system. Included in the work scope is the removal, refurbishment, and installation of the generator collector ring assembly.
By the end of February, we received a PO to perform the work. A trip in May was scheduled for Jim Delawder & I to job walk thru at the hydro generating station. The job walk confirmed the generator collector ring assembly location on the shaft, plant location and layout, ring assembly prior removal, and crane availability. A spare set of collector rings was identified and visually inspected during this visit. The spare rings could change our job work scope and reduce the replacement ring time requirement. We proposed a revised work scope plan with reduced on site ring change time required utilizing the spare rings. We shipped the spare ring assembly to Springfield and qualified them. This was a huge win for the contractor because their work scope was limited while we have the generator/excitation system locked out (safety LOTO) while we’re changing rings. The spare ring assembly reduced our ring change out time by 2 days.
In October, Jim Delawder & Floyd Mann & I returned to the station to remove the collector rings and to install the spare set. The job was completed on schedule. The used rings were shipped to Springfield. Springfield tested & inspected & refurbished rings & returned to Green Springs. The contractor & the Hydro Generating Station employees thanked Horner for their hydro generator knowledge, professionalism, and work ethic. The electrical contractor’s excitation modernization project was completed by the end of November. The generator was energized and startup was a success. No collector ring or excitation system issues. The spare rings were tested, inspected, polished, and returned to the Station. 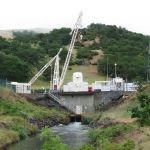 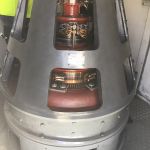