The first hydro-electric power plant was commissioned in 1882 in Appleton Wisconsin. It was a collaboration between the owner of Appleton Paper and Thomas Edison. Since then there have been many power plants built to convert moving water through an impeller that turns a generator rotor to produce electricity. This is the original “green power” and was way ahead of solar and wind power to produce electricity without burning fuel.
Horner Industrial Group began marketing efforts in hydro-electric power over 10 years ago by attending hydro-electric power trade shows. We quickly learned that most of the power plants are run by the Army Corps of Engineers. There are only a handful of large general contractors who are authorized to bid on hydro-electric projects, to the Army Corps of Engineers. The general contractors then use subcontractors, such as Horner Industrial Group, to perform service work at the hydro-electric power plants. During these trade shows, our company established a working relationship with a general contractor from Arkansas, Koontz Electric, and we continue to perform field service work for them.
A recent job we completed was to test and inspect large slip ring assemblies on four large generators at the Dardenelle Hydro-dam Powerhouse in Russellville, Arkansas. Jim Delawder and Bert Serak spent a week on-site for this job, including their travel time. These four generators were very large, with 8’ diameter slip rings. The output of these generators is 42,368 KVA, 13,800 volts AC, 1,773 amps, and they rotate at only 75 RPM. As the rated RPM goes down, the size of a motor or generator goes up. From a motor shop view, these generators are truly an engineering marvel.
Our findings were that 50% of the brush holders on these generators were out of specification. Jim and Bert, being the savvy sales guys that they are, easily sold a follow-up field job in September, to install new components to restore the generators to their former glory.
We also were invited to quote the same work-scope on three large hydro-generators at a power plant in Tennessee. One good job leads to another, just by providing solid service and perceived value to our customer – and that is how we have been able to continue this type of field work, over the years. Kudos to Jim and Bert for a job well done! 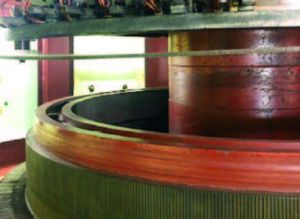 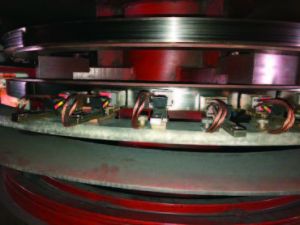 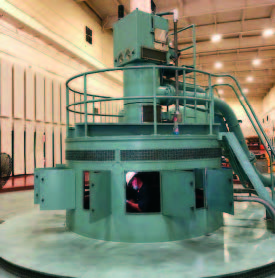