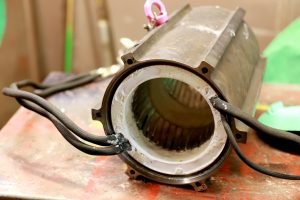 We received a phone call one day from a Phd. Mechanical Engineer working on-site at an Air Force Base. I soon realized that this was a phone interview to see if our company was qualified to help him on his jet engine projects. After working together for about a year, successfully fabricating custom parts for the jet engine test stands, the engineer referred our company to a Phd. Electrical engineer who asked if we could help him develop a high temperature generator.
On a jet fighter plane, space is at a premium as there is a need to produce more electrical power for additional sensors and avionics. Since it’s impractical to stretch a jet plane, like a limo, the engineer proposed building a generator that could withstand extremely high temperatures by moving it into the jet engine compartment.
To build a generator that could withstand temperatures up to 1200 degrees F. seemed impossible and out of this world. Well, this is what they do at the Air Force Research Lab – brainstorm a need in their think tank, then try to make it a reality by throwing plenty of resources at the project. If this concept is possible there are many applications to enhance our existing fleet of jet fighters, including the newest F-35.
When we held a meeting with our winding department they all shook their heads and said that it was impossible. The engineer assured us that it is possible with the right materials. He provided all the exotic materials that were sourced from around the globe. Our first attempt ended in failure. The slot liner material had the electrical and heat properties but did not have the mechanical strength to withstand the stress of installing the winding. We felt defeated but the engineer was undaunted. It was back to the drawing board to source a product that would do the job.
The tenacity of the engineer was impressive. It made me think of how Thomas Edison must have felt each time he tried another material for the filament in his incandescent light development. After 37 grueling failures, he finally found the right material in tungsten. That is the definition of tenacity, knowing that your theory is sound but you just need to find the right stuff.
Our second attempt at winding the high temp generator with improved materials proved successful. Our machine shop made special forms to encapsulate the winding in ceramic. We then had to dry out the winding insulation by placing in our burnout oven at 800 degrees for 24 hours. Amazingly, the generator winding passed all required electrical tests.
We then proceeded with assembly with special bearings. Did I mention that this generator is capable of operating at 20,000 RPM? After completing this project, repairing an industrial 3600 RPM two pole motor rated at 300 degrees F. seems like a walk in the park.
The engineers are very pleased with the fruits of our labor, proving that their prototype design is worthy of further testing on their jet engine test stand. Special thanks to our winding department personnel, Dave Mader, Stephen Clippinger, and Mark Bethel, for having the courage to accept failure and test their winding skills to the limit. Additional thanks to our machine shop and assembly departments for their contribution to the success of this project. 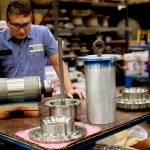 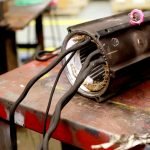 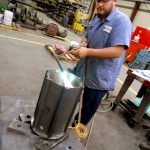 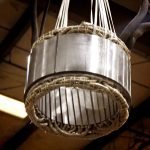