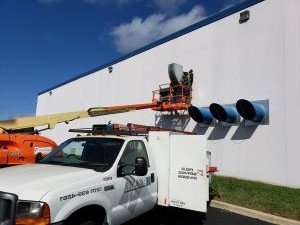 A Printing Company in Crawfordsville, IN contacted Horner Fan and Fab after getting multiple complaints from neighbors about the noise the facility was making. The noise was contributing to an exhaust fan that pulls the shredded paper from the inside of the building and puts the paper into a hopper. When the air came out of the building through the exhaust it sounded like a jet engine. With the plant running 24/7 you can see why there were complaints.
Brad Snodgrass went out to the plant and took measurements, looked at the round airducts, looked at the exit ducts, and took sound readings. He came up with a plan to design a pipe that went out but also went up like an elbow design. The large pipe would expand the air and make it slow down. Slowing down the air would reduce the noise. As the air goes around the bend and up it would also slow the air down some more.
Great team work by the division helped this project be a success. Fabrication was completed by Steve Floor, Nathan Anderson worked in the field to install it, Brad Snodgrass and Matt Phelps worked on the Design and Engineering of it. 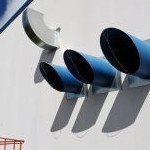 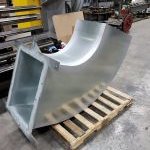