Centrifugal Force – What Is It?

Centrifugal Force – What Is It?

The words “centrifugal force” were first used in the year 1698, so it is far from a new concept. A dictionary definition is “the apparent force that is felt by an object that is moving in a curved path that acts outwardly away from the center of rotation.”
We have all felt the effects of centrifugal force when we are driving our car or truck and turn a corner at a high rate of speed.
As long as we are moving in a straight line, we do not feel this force but when we exit the highway at a high rate of speed onto a 270 degree circular ramp, we feel the force pulling us the opposite direction that we are turning.
In the industrial world, this force is ever present in all rotating equipment. Every motor rotor feels the effect of centrifugal force as the speed of rotation increases. On rotating elements, centrifugal forces increase with speed squared. That is to say that the force is not linear with speed – it squares as speed, or RPM, increases. As a repair company, we dynamic balance all rotating parts of a motor – the rotor, fan, coupling or sheave. By balancing we are reducing the centrifugal force of a heavy spot imposing undue force on a rotating part resulting in excessive vibration and premature failure of the bearings, shaft fits, etc. All industrial equipment has maximum revolutions per minute (RPM) ratings on the nameplate. This defines the safe speed range that the equipment was designed to operate within. When the rotational speed increases beyond the rated RPM, centrifugal forces can cause the rotating components to fail with devasting consequences. Our company provided a 600 HP DC motor to an aggregate customer to dig gravel from a pit. The motor drives a gearbox that runs a hoist cable drum that lifts a large bucket full of material. When the loaded bucket is at the maximum lift point, a holding brake secures the load and the motor is at rest. Well, the holding brake failed allowing the loaded bucket to drop at terminal velocity – 120 + MPH. With the load now driving gearbox, it becomes a speed increaser, rather than a speed reducer, causing the motor RPM to hit near 10,000 RPM. Please note that the motor is rated at a top speed of 2,700 RPM, so the motor over speed was about 3x rated RPM. The photos show how the commutator bars exploded with such force that they broke the ½” thick cast
iron motor frame. The motor damage looks like an explosive such as a hand grenade or C-4 was detonated.
Another example of motor over-speeding is when a DC motor loses the shunt field current but the DC drive does not shutdown the armature current. When this situation occurs, the DC motor becomes a series type motor and the RPM continues to increase until centrifugal force stops it by breaking the banding and allowing the armature coils to launch out of the armature core. I have witnessed this situation at a customer’s site, during my field service days. The motor sounded like a jet engine ramping up for takeoff – until it came to a
sudden stop with a very loud bang. The sliver lining to that dark cloud was that we did get a nice motor and drive repair out of that bad situation! 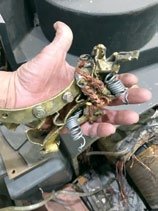 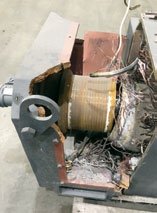 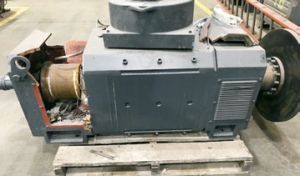