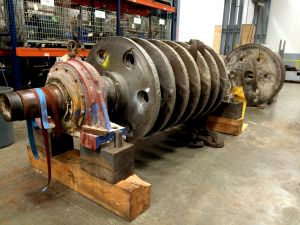 Several months ago, a Cement Company became concerned about a bearing that was failing on their rock crusher. It should be noted that this customer has only one rock crusher so when it is down, production is also down. There were multiple discussions and planning meetings with the customer as well as behind the scenes as this project was pushing the limits of our equipment. Special thanks go out to the Horner team that planned this job to make it a reality: Jim Delawder, Kim Shellabarger, Dave Whited, Mark Russell and Alan Horner. We estimated a 10 day outage to remove, repair, and re-install the rock crusher rotor at the company. This may not seem like much of a challenge until you realize that the rotor weighs 60,000 lbs. with the bearings and coupling and the roof of the building must be removed to rig the rotor out. Rigging alone was estimated at 4 days with 6 days estimated shop time. After a couple of months of extreme sales effort, Mark Russell was awarded the job and the schedule was set for the end of October. As luck would have it, the brick in the rotary kiln failed so the customer had to schedule an emergency  down period in September. Jim Delawder was designated to run the on-site job including the rigging crew as a turnkey job.
The rotor was removed in two days and shipped to our Washington St. facility Saturday morning since they have the crane capacity to handle the job. Since the shop workload was extremely heavy, field service personnel were drafted to help with the dismantle of the rotor. Special thanks to Joe Oliver, Jerry Voelkel and Alan Horner for their help with the dismantle, over the weekend to get this project off to a good start. Special locknuts for the large flywheels had to be fabricated along with locking washers. These were large, custom sized locknuts. that were not available on the market so Fan & Fab and the Horner Machining Services stepped up to the plate to meet the need. Balancing was also a challenge for such a large part but we got over that hurdle as well.
The rotor was then rigged back into place with Piqua Steel’s new 300 ton crane, due to the height of the rig and the boom angle to reach over the building. Just to grasp the size of this massive crane, it cost $2.7 million and it takes 5 semi-tractor trailers to transport the weights and booms to the jobsite. The rock crusher rotor was lifted from a semi- trailer and rigged through the roof of the building and onto the base.
This job is an excellent example of what we can accomplish if we have the courage to get out of our comfort zone and work together to draw from the deep pool of talent within our company. 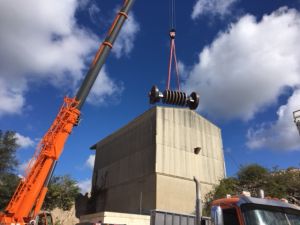 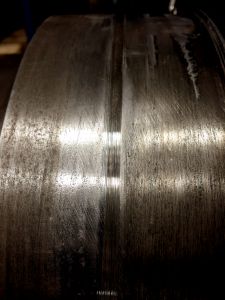 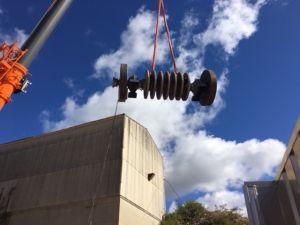