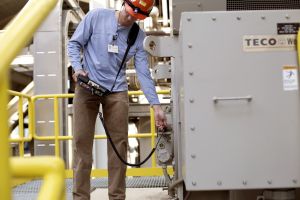 A major steel mill was looking to upgrade their maintenance practices thru predictive maintenance vibration analysis.
There were several meetings with Brad Barton of Horner’s Electrical Mechanical Diagnostics Service (EMDS) group to identify equipment and understand their expectations.
The EMDS reporting was covered in depth, a vibration collection route was laid out and frequency of reporting established.
The machines identified ranged from 10,000 hp AC motors to smaller AC and DC motors in the range of 100hp up to 1250 hp as well as gearboxes.
Horner’s field service group installed remote accelerometers on equipment deemed not safe for personnel to enter allowing this critical equipment to be monitored and reported.
We had to overcome skepticism with some of the maintenance personnel as they stated this “vibration stuff was voodoo magic”
We started the program. Guess what?
Something that never happens happened!
On the very first data collection a major defect was discovered on a large, critical gearbox. The maintenance supervisor was immediately notified, the gearbox was inspected and the plant personnel saw the defect.
As a result the gearbox was scheduled for replacement. The real savings was no loss of production. Per plant personnel downtime has been identified as “thousands of dollars per minute”!
Skeptics became believers! As a result EMDS has established multiple predictive maintenance routes throughout the entire plant. There have been several major issues found on equipment where the customer could schedule the changeout resulting in no production loss and big savings. Hats off to the Horner’s EMDS group. Their program and reporting is the best in the industry.