A Fan That Cannot Be Balanced

A Fan That Cannot Be Balanced 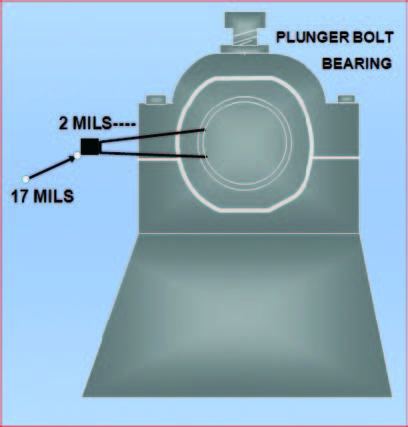 A power plant kept getting above normal levels of unbalance on a 5000 horsepower 720 RPM fan. They had made several attempts trying to balance the fan, all of which failed. It was then that they made the decision to call in Nelson Baxter who is the manager of Horner’s EMDS Division. Equipment: A 5000 HP 720 RPM fan at a Power Plant.

Symptoms: Above normal levels of unbalance that resisted balance efforts. Several attempts were made to balance the fan, all of which were unsuccessful.

Test Results: After attempting several balance shots in an I.D. fan, the casing vibration levels were reduced to around 2-3 mils, but would not go any lower. Since there was difficulty in balancing the fan, shaft stick measurements were taken to determine the absolute motion of the shaft.

Fixing The Problem: The shaft movement was discovered to be over 17 mils. Since the bearing clearance was only 8 mils, this was a strong indication that the bearing was moving in the housing. A large plunger bolt at the top of the bearing was tightened. After tightening, the casing vibration increased from 2 to 3 mils to 21.5 mils. The fan was then easily balanced to below the 1 mil level desired by the plant personnel. What had been occurring was that with the bearing moving in the housing a non-linear system was present. This made balancing all but impossible.