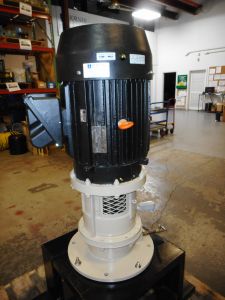 A Louisville customer recently brought in a 60 hp integral vertical motor pump assembly where the motor was water-cooled. The circulation tubes running through the stator had clogged with lime buildup causing the motor to overheat which resulted in the motor windings being burned to a crisp. The customer came in to witness the teardown and to discuss options to prevent future unplanned downtime, as this had happened numerous times before. As it turns out the customer has four of these same pumps in remote locations without monitoring devices so there’s no way for them to tell when the water stops flowing through the motor causing it to fail until it fails and their customers aren’t getting the water they’re expecting to have when they turn on a faucet.
Combining the efforts of the Louisville team, Charlie Mings, Derek Phelps, Joe Dupont and Gus Bezy along with our Thermal Spray and Coatings Team of Jim Kennedy and Ben West we were able to come up with a viable solution that used off-the-shelf products including a standard TEFC style motor with a C-Face. We were able to re-use the original pump shaft and impeller after they were both restored by our Thermal Spray and Coatings group.
The pump frame had to be modified with a special made flange that would bolt up to the motor and the matching flange had to be manufactured for the motor to bolt up to the pump frame. We supplied an off-the-shelf standard flanged coupling and created access windows with guards in the pump frame to be able to tighten and/or adjust the coupling between the pump and the motor.
The end result was that the redesigned pump that was delivered to our customer is a product that will offer them years of trouble-free operation. If the motor should fail in the future they would now be able to purchase a standard off-the-shelf motor, (hopefully from us), that will get them back up and running in a minimal amount of time, not to mention the fact that the impeller has been Thermal Sprayed and coated with Loctite so that won’t be coming out anytime soon as well.
We’re now waiting for the customer to remove the other three units so we are able to make the same modifications to them. This is what being a solutions provider is all about.