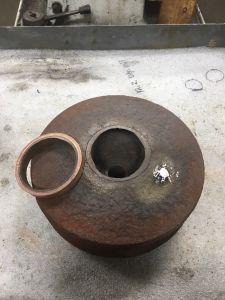 The pictures shown are from a recent job that was just completed for one of Horner’s customers. The impeller in the pictures is part of a sewage pump that had been in use for years and was removed from service when it finally failed.
Picture #1 shows the 16” impeller in it’s “as received” condition, (cleaned of course). As you can see, the wear ring was broken completely off of the impeller, which is what caused the failure. What you can’t see is that the metal on the impeller is so thin you could poke a screwdriver through it in some places. A replacement impeller had a quoted delivery of 14 weeks and the customer wasn’t able to wait that long, so the only option was to restore it. Picture #2 shows the same impeller during the restoration process which we refer to as the Horner ThermalLoct™ process. Note that we were able to create a new wear ring by using our Twin Arc Thermal Spray process. This is new metal that was sprayed onto the existing surface to build up the area where the old wear ring had been to re-create a new wear ring. We then sprayed the entire impeller with Bronze to build up the surface thickness to original dimensions. What you’re seeing in the picture is the impeller during the machining process where we’re machining the bronze spray to final dimension. You can see the raw bronze spray inside the flights of the impeller. Note that the original impeller was cast iron and the replacement impeller would have also been cast iron which would have been subject to the same level of corrosion the original impeller was exposed to. We sprayed a base coat metal on the impeller first, then over-sprayed that with bronze. To create a significantly harder, corrosion resistant surface than the original impeller.
Picture #3 shows the same impeller in it’s finished state. The entire impeller, except for the wear ring, was coated with Loctite Ceramic coating. This coating in and of itself has excellent wear properties, however, combined with the Horner’s Twin Arc Thermal Spray process it completes Horner’s ThermalLoct™ process resulting in unparalleled abrasion resistance while extending the pumps functional life by multiple times. Not to mention that the Loctite finish coat will bring the pump’s efficiency close to it’s original efficiency and will hold it there for a longer period of time than if the impeller wasn’t coated. 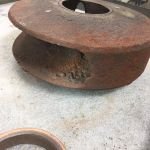 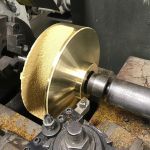 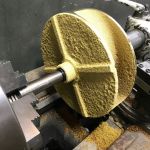