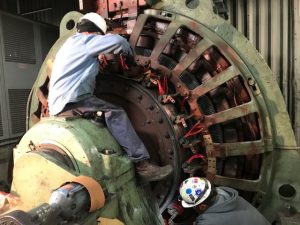 Horner Industrial received a call from a Steel Producing Customer that they had a large open frame DC motor with a burned brush holder on a motor. Troy Elder (Fort Wayne) was our “first responder”, grabbing a Megger, and camera, he rushed to the customer site to help them out. However, when he arrived at the site, he knew they were in real trouble.
The motor had gone to ground and had caught fire, but unbelievably, it was still running when they realized they had a problem. Troy contacted MFS who assembled a crew at a moment’s notice to travel to the customer’s site.
We initially thought that we are going to need to fabricate parts, due to the fact that the motor is over 50 years old and was obviously specially built at that time. As work was being done, the customer mentioned that they “thought” they had a spare motor in a remote warehouse. We went over to their warehouse to determine if the motor was identical and if we could use parts from that spare motor. Luckily we could! Horner’s Field Service Team installed 115 new brushes, did the repairs, and installation of the replacement parts. Our team witnessed the unloaded start up of the motor and was present again to witness the full production start up on the motor.
After dismantling the failed motor to evaluate and test the shunt, series, interpole windings and cleaning and removing the carbon from the armature winding, and scrapping the slots and commutator, we still had good windings. The customer summed it up well, and said “We hurt the motor, but it was not fatal”. We had to remove and replace the brush holders, brushes, springs, electrical rings that connect the brush holders insulators and the actual cast iron brush holder yoke. The parts were large and heavy enough that we had to bring in a small portable crane to assist with the material handling. Sanding and seating all new brushes too. Of course this is in a steel plant, so the environmental conditions are less than ideal for cleanliness, temperature and lighting. Neutral was set and we were ready to begin the real world testing, will it run?
This was truly a team effort, using Ryan Haffenden from the FW facility, Jerry Voelkel and Corban Hartley from the EFS group, and Evan Baldwin and Mark Hartman from the MFS group. Mark Hartman was the on-site lead guy for the project, Mark has years of experience with this customer and equipment, and he once again proved to them why they have the confidence in him, and in Horner that they do, depending on us to get them back into production. 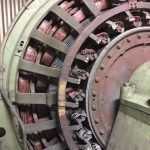 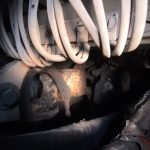