History of Horner Fan and Fabrication

History of Horner Fan and Fabrication 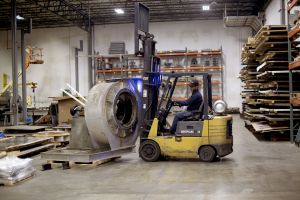 Indiana Fan & Fabrication operates as a division of Homer. It was founded in 1895 and has been an Indianapolis operation ever since.
Thomas Bemis moved to Indianapolis in 1890 and worked several years for a pattern and model maker. The company he worked for manufactured special machinery parts, provided drafting and engineering services, and made patterns for various castings. The firm also acted as “inventors’ assistants,” manufacturing practical models of new inventions and supplying working drawings and blueprints. Bemis seems to have marketed the Triumph Exhaust Fan, which was used in laundries, engine and boiler rooms, theaters, and packinghouses.
One of, if not the first company to conceive the idea of attaching a fan blade to a water motor was started in 1895 by two very creative individuals, Thomas Bemis and Josiah B. Dill. Bemis, an inventor, was long associated with an iron and brass foundry in Indianapolis. Dill on the other hand was a druggist and, briefly, secretary and treasurer of the Duthie and Daggett Tool Company. Speculation has it that Bemis came up with the idea of the water fan and perhaps made a prototype in his foundry.
In 1895 Bemis, Dill, S.M. Dyer, and F.F. McCiea established the Specialty Manufacturing Company on Meridian Street. The company made patterns for various new parts and equipment, manufactured machinery, fans (belt driven, electric and water powered), and manufactured bicycles for a period around the turn of the century.
Between 1900 and 1902 Dill assumed the presidency of Specialty Manufacturing, and Bemis went on to own and operate his own company. Sometime in 1907 there was an issue that resulted in the renaming of the company to Indiana Fan Company.
In 1918, Frank M. Graham began working at Indiana Fan Company. He had learned the sheet-metal trade in a shop run by his father. In 1937 the company was purchased by Graham and continued to operate as Indiana Fan. In 1946, with the aid of an $8,000 loan, the company erected a new building at 427 S. Alabama Street.
The Graham family continued to produce air-moving equipment and did custom metal fabrication. Graham’s son-in-law, Simeon Hale, later managed and was the main stay of the business. Under Hale’s leadership the company continued to manufacture heavy industrial fans, dust collection systems, as well as fabricating associated metal items (support structures, ductwork, and transitions). Hale was a fascinating individual who could design and layout a complex dust collection system on a matchbook cover. He even worked with some of lndiana Fan’s current employees.
Robert and Karen Dittemore purchased the company in 1975. In 1980 the building at 427 S. Alabama was expanded and along with this expansion brought diversification. In the early 1990’ s the company incorporated automation to increase productivity, and make the company more competitive in an aggressive industry.
Horner Electric Company purchased Indiana Fan Company in 1997. In 2006 Horner purchased Herman & Company, a small family owned structural steel fabricator at 1100 East Maryland Street. After acquiring land at 2045 E. Washington Street, planning began to construct a new facility. This building was designed to be large enough to bring Indiana Fan & Fabrication and Herman Company under the same roof and also provide warehouse space for future expansions.