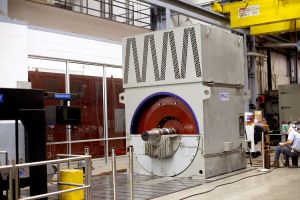 A Cement Plant in Louisville decided to purchase a spare 4500 Hp motor for their Raw Mill to back up a motor that had been in operation for years. A Raw Mill is a piece of equipment used to
grind up materials into a raw mix during the manufacture of cement. The raw mix is then fed to a kiln, which transforms it into clinker, which is then ground to make cement in the cement mill. The company did their due diligence and sought out quotes for a
replacement motor. When all of the quotes came back, they were surprised at the cost difference. They received a quote directly from a motor manufacturer in China that was 40% less than name brand, reputable, manufacturers here in the United States. After checking out the engineering data they made the decision to purchase the motor from the Chinese manufacturer. The existing motor is mounted 30 feet in the air so when it came time to install the new motor it took 4-5 days to remove the old motor and install the new one. Once the mechanical portion of the install was complete, they put power to the new motor and hit the start button, resulting in fire coming out of the motor. It then took another 4-5 days to take out the new motor and replace it with the old motor that
had been scheduled to be reconditioned.

What the customer originally thought was a bargain has turned into anything but. Horner picked up the new motor and brought it to their Indianapolis facility to rebuild it the way it was supposed to be built in the first place. The first additional cost they incurred is the cost of special permits to transport the motor from Louisville to Indianapolis. Once the motor arrived at the Indianapolis shop and inspected Horner’s technicians found that there was a lot of work this motor needed to have done. The motor windings had to be repaired where the failure occurred and then reinsulated. They had to remove and reinstall the cooling fan blades, reconnect the coils and amortisseur windings, tape and reinsulate coil jumpers, balance the armature, recondition the bearings, repair the transducer, design and fabricate new access panels, assemble, test, and paint. Once repaired, the motor was once again transported back to Louisville once again incurring the cost of special permits. Horner Industrial’s Field Service Team took the next 4-5 days to remove the old motor and installed the repaired new motor. Horner Logistics picked up the old motor to return it to Indianapolis to be refurbished as a spare. 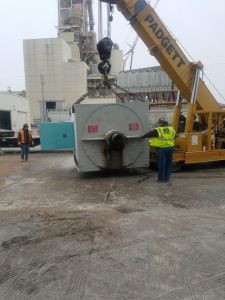 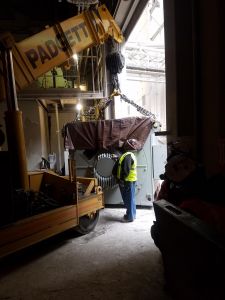 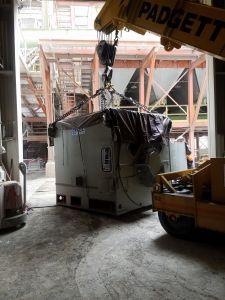 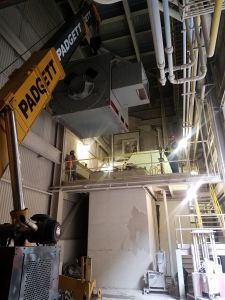