Horner Fan & Fabrication had been involved with the rebuild and repair of an existing furnace fan earlier in 2018 at an Aluminum Manufacturer. The project was stressful due to time constraints and very expensive for the customer. This experience led Horner Sales to suggest to the customer that they needed a back-up plan in the event they had another fan go off line. This led the customer to approach Horner about building them a fan that could be used for just such occasions.
The existing furnace units used at the plant were manufactured in Germany. Although the plant had many existing drawings of the systems there was not much available on the fan units themselves. Horner had to arrange a visit to the facility, have a fan lowered from the ceiling of the furnace then do a complete measurement of the unit including micrometer level details of the blades.
Materials used for construction of the original fan units were also not available. Since the fans experience operating temperatures well above 900 degrees (F) it was determined that the material to be used would be 304 Stainless. This included the massive hub as well as the fan center. The blades were unique and formed (like an aircraft propeller blade) so had to be formed from two different pieces a front and back that were both formed and patterned differently to make the blade shape.
The fan blades are not a single piece of bent metal…as you may think. The fan blades are a work of art made by Horner craftsman employing many years of tempered experience.
I believe we developed a strong relationship with the Aluminum Manufacturer. I also believe they picked us because we could do what others deemed impossible. Its projects like this that put Horner in a class by itself. Do these come along often? No. But I would bet they will call Horner when they do. 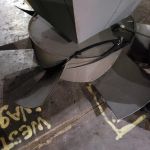 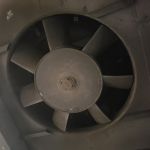